2.2 Hollywood’s Economic Leadership
Hollywood Global Economic Leadership It is a state of mind occurring wherever people connected with the movies operate whose goal is the mass production of dreams For the purpose of this book, Hollywood is defined as the system of the US entertainment industry revolving around the following six major companies that are part of the Motion Picture Association of America (MPAA):

All the studios, at the time of this writing, are units of large media conglomerates operating domestically and internationally in different segments of the entertainment industry.
The core business of the Hollywood studios is to finance, produce, and distribute entertainment content ranging from feature-length motion pictures to TV programs, including animation and live action series.
The entertainment products they produce are experience goods,whose value is determined by the individual experience they provide to their audiences, an entertainment experience.
These products are also public goods non-excludable in consumption,one person’s consumption of an entertainment product does not affect its potential fruition from another person, unlike other products as physical goods.

Economic Analysis of the Hollywood System

The Hollywood system comprises profit-oriented entities operating jointly and severally to reach a profit in the creation, production, and distribution of entertainment, domestically and internationally. It represents a relevant industry in economic terms, and specifically for the United States,a key export within its international trade balance.
To specifically analyze the structure of an industry, Porter proposes the “five forces of competition” theoretical framework (1980). Applying the framework to the American entertainment industry, they are: the competition and rivalry among the existing firms within the industry (the Hollywood studios), 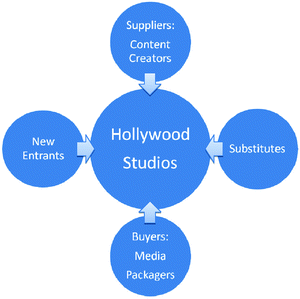 Their analysis provides a useful starting point for subsequent evaluations on the nature of the industry. The magnitude and the interaction among these five forces determine the structure or the sector, its boundaries and dynamic evolutions, its players and their collaborative and competitive interactions, the existence of barriers to entry the sectors for newcomers, the degree of existing competition in the industry, as well as its attractiveness and its equilibrium overtime.
Utilizing this framework, the structure of the US entertainment industry is best described as a cluster of competitive industries: an oligopoly of six entities, the Hollywood studios, or “sexopoly,” as Epstein puts it (2005, p. 93), which solidly share the leadership in the competitive landscape. While intensely competing on certain aspects of the business, as access to talent, Hollywood studios cooperate in others, as in the activities supported by the MPAA, ranging from the rating system for the feature-length motion pictures released in theaters to the defense of the intellectual property rights of entertainment content against its unauthorized utilization.
Their competition appears to be rarely based on cost advantage, resulting in the production of entertainment at the lowest possible cost, rather on differentiation advantage, producing the best possible entertainment content and recouping the investment on a global scale. As mentioned, they are also associated in the MPAA, domestically and internationally, to protect their interests. The competition among Hollywood studios appears to stimulate the production of entertainment artifacts in line with the demand of audiences worldwide: Their products have indeed the leadership in the US entertainment business and globally. In the process of creating and distributing entertainment

The Drivers of Hollywood’s Competitive Advantage

From an industrial economics standpoint, Hollywood’s drivers of the current worldwide competitive advantage can be explained utilizing Porter’s theoretical framework of the “national diamond”.
This theoretical framework explicates competitive landscapes and markets where an intense competition appears to be a positive factor in determining competitive advantage, especially if the competitors share geographical proximity. Under this framework, four conditions, the “determinants of national advantage”, have to be considered,jointly and severally”.

Demand Conditions
The US domestic market (including Canada) is by far the largest in the world in economic terms, with on average more than 1.4 billion tickets sold per year and approximately US $9B generated at the box office per year in the period 2000–2009

Unit 3:The Role of Information in an Economy