The relational model consists of three major components:
1. The set of relations and set of domains that defines the way data can be represented (data structure).
2. Integrity rules that define the procedure to protect the data (data integrity).
3. The operations that can be performed on data (data manipulation).

A bad design may have several properties, including:

Anomalies: Anomalies are those unexpected and integrity error that occur due to the flaws or limitation of given database.There are three types of anomalies .They are

Functional dependencies
It is a relationship between columns X and Y such that given value of X can determine the value of Y
i.e X   →   Y  where , X is determinant of Y  and Y is functionally dependent.

Application of closure set of attributes

Decomposition
Decomposition in database means breaking tables down into multiple tables. If the relation has no proper decomposition, then it may lead to problems like loss of information. Decomposition is used to eliminate some of the problems of bad design like anomalies, inconsistencies, and redundancy. 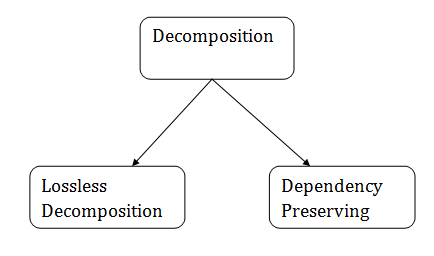 Normalization
It is the process of decomposing relations with anomalies to produce smaller, well-structured relations that

Each column is unique in 1NF.
As per the rule of first normal form, an attribute (column) of a table cannot hold multiple values. It should hold only atomic values.

Example 2: Suppose a company wants to store the names and contact details of its employees. It creates a table that looks like this:

this table is not in 1NF as the rule says “each attribute of a table must have atomic (single) values”, the emp_mobile values for employees John & Seema violates that rule.
To make the table complies with 1NF we should have the data like this:

In First Normal Form, any row must not have a column in which more than one value is saved, like separated with commas. Rather than that, we must separate such data into multiple rows.
Student Table following 1NF will be :

Using the First Normal Form, data redundancy increases, as there will be many columns with same data in multiple rows but each row as a whole will be unique.
Second Normal Form (2NF)
The entity should be considered already in 1NF and all attributes within the entity should depend solely on the unique identifier of the entity.
Example: 1  Sample Products table:

Example 2: Suppose a school wants to store the data of teachers and the subjects they teach. They create a table that looks like this: Since a teacher can teach more than one subjects, the table can have multiple rows for a same teacher.

Candidate Keys: {teacher_id, subject}
Non prime attribute: teacher_age
he table is in 1 NF because each attribute has atomic values. However, it is not in 2NF because non prime attribute teacher_age is dependent on teacher_id alone which is a proper subset of candidate key. This violates the rule for 2NF as the rule says “no non-prime attribute is dependent on the proper subset of any candidate key of the table”.
To make the table complies with 2NF we can break it in two tables like this:
teacher_details table:

Now the tables comply with Second normal form (2NF).
Third Normal form (3NF)
A table design is said to be in 3NF if both the following conditions hold:

An attribute that is not part of any candidate key is known as non-prime attribute.
In other words 3NF can be explained like this: A table is in 3NF if it is in 2NF and for each functional dependency X-> Y at least one of the following conditions hold:

An attribute that is a part of one of the candidate keys is known as prime attribute.
Example: Suppose a company wants to store the complete address of each employee, they create a table named employee_details that looks like this:

To make this table complies with 3NF we have to break the table into two tables to remove the transitive dependency:
employee table:

It is an advance version of 3NF that’s why it is also referred as 3.5NF. BCNF is stricter than 3NF. A table complies with BCNF if it is in 3NF and for every functional dependency X->Y, X should be the super key of the table.
Example: Suppose there is a company wherein employees work in more than one department. They store the data like this:

The table is not in BCNF as neither emp_id nor emp_dept alone are keys.
To make the table comply with BCNF we can break the table in three tables like this:
emp_nationality table: