What is the ER Model?

What is ER Diagrams?

Entity relationship diagram displays the relationships of entity set stored in a database. In other words, we can say that ER diagrams help you to explain the logical structure of databases. At first look, an ER diagram looks very similar to the flowchart. However, ER Diagram includes many specialized symbols, and its meanings make this model unique.

Why use ER Diagrams?

Here, are prime reasons for using the ER Diagram

Components of the ER Diagram

This model is based on three basic concepts:

Example
For example, in a University database, we might have entities for Students, Courses, and Lecturers. Students entity can have attributes like Rollno, Name, and DeptID. They might have relationships with Courses and Lecturers. 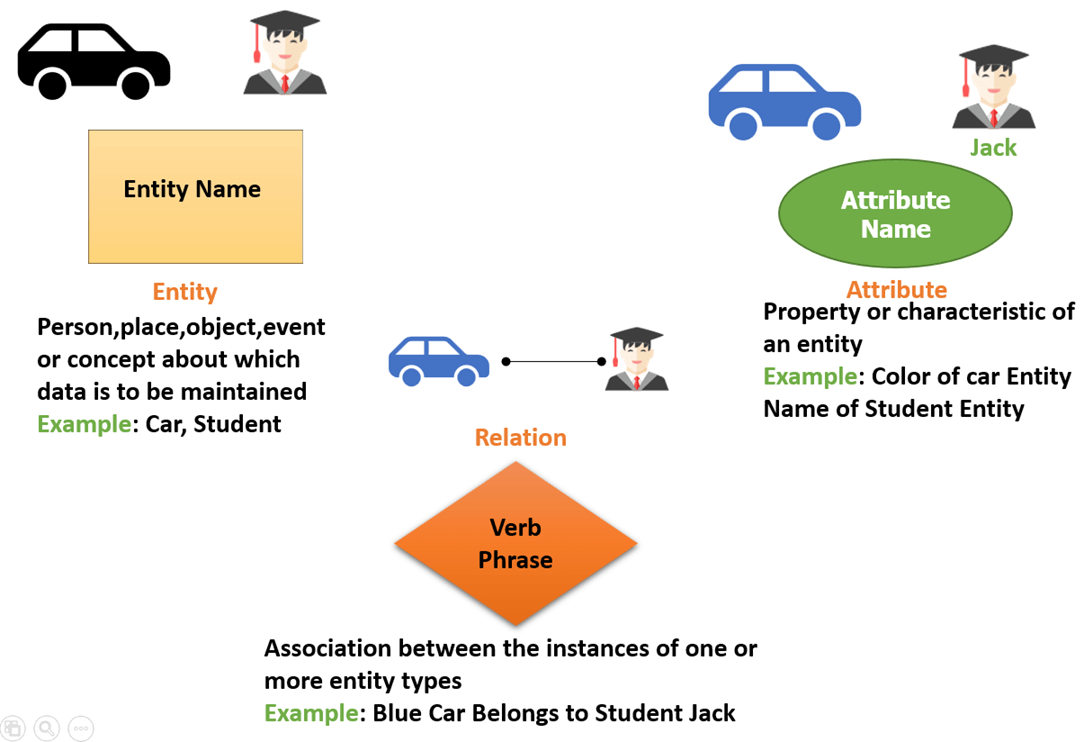 A real-world thing either living or non-living that is easily recognizable and nonrecognizable. It is anything in the enterprise that is to be represented in our database. It may be a physical thing or simply a fact about the enterprise or an event that happens in the real world.
An entity can be place, person, object, event or a concept, which stores data in the database. The characteristics of entities are must have an attribute, and a unique key. Every entity is made up of some ‘attributes’ which represent that entity.
Examples of entities:

Notation of an Entity

Student
An entity set is a group of similar kind of entities. It may contain entities with attribute sharing similar values. Entities are represented by their properties, which also called attributes. All attributes have their separate values. For example, a student entity may have a name, age, class, as attributes.

Example of Entities:
A university may have some departments. All these departments employ various lecturers and offer several programs.
Some courses make up each program. Students register in a particular program and enroll in various courses. A lecturer from the specific department takes each course, and each lecturer teaches a various group of students.

Relationship is nothing but an association among two or more entities. E.g., Tom works in the Chemistry department.

Entities take part in relationships. We can often identify relationships with verbs or verb phrases.
For example:

A weak entity is a type of entity which doesn’t have its key attribute. It can be identified uniquely by considering the primary key of another entity. For that, weak entity sets need to have participation.

In aboe example, “Trans No” is a discriminator within a group of transactions in an ATM.
Let’s learn more about a weak entity by comparing it with a Strong Entity

It is a single-valued property of either an entity-type or a relationship-type. For example, a lecture might have attributes: time, date, duration, place, etc.
An attribute is represented by an Ellipse 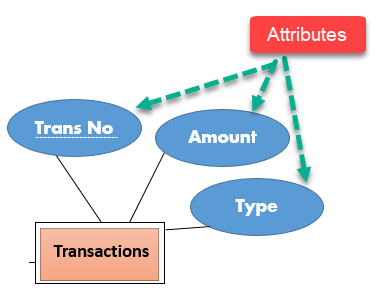 An example of a multivalued attribute from the COMPANY database, as seen in Figure 8.4, are the degrees of an employee: BSc, MIT, PhD.

iv. Derived Attribute –
This type of attribute does not include in the physical database. However, their values are derived from other attributes present in the database. For example, age should not be stored directly. Instead, it should be derived from the DOB of that employee. In ER diagram, derived attribute is represented by dashed oval.

the complete entity type Student with its attributes can be represented as: 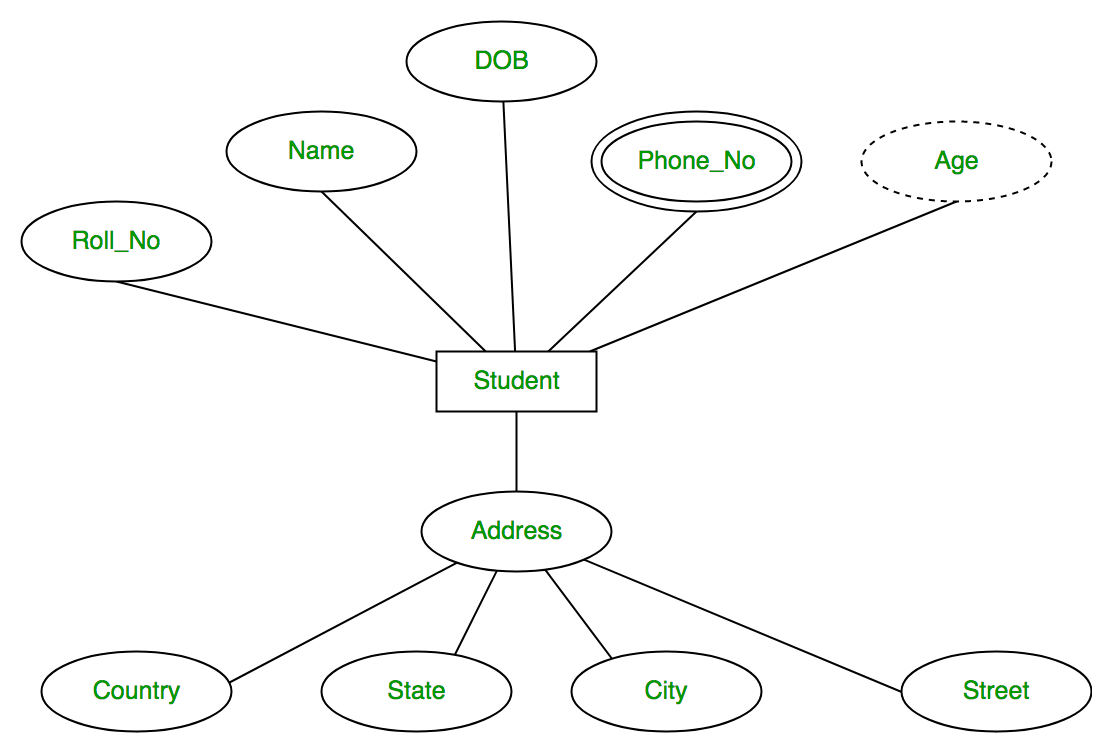 For example, Faculty and Student entities can be generalized and create a higher level entity Person. 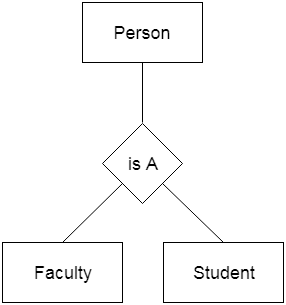 For example: In an Employee management system, EMPLOYEE entity can be specialized as TESTER or DEVELOPER based on what role they play in the company. 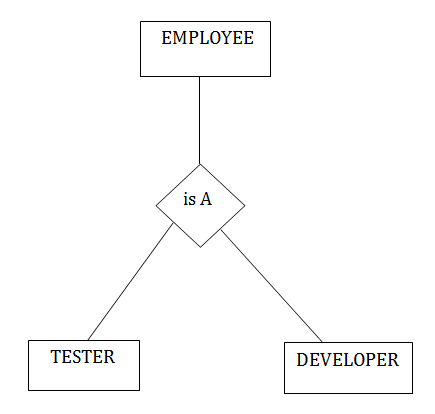 In aggregation, the relation between two entities is treated as a single entity. In aggregation, relationship with its corresponding entities is aggregated into a higher level entity.
For example: Center entity offers the Course entity act as a single entity in the relationship which is in a relationship with another entity visitor. In the real world, if a visitor visits a coaching center then he will never enquiry about the Course only or just about the Center instead he will ask the enquiry about both. 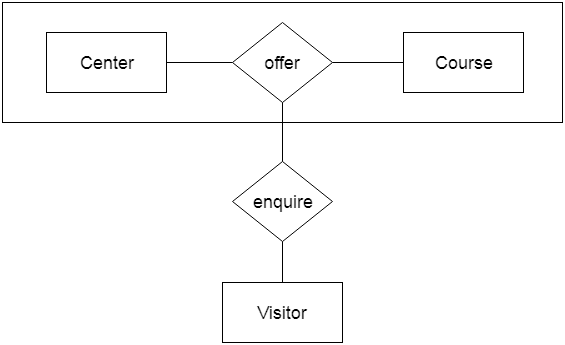 The number of times an entity of an entity set participates in a relationship set is known as cardinality. Cardinality can be of different types:

1.One to one (1:1)– A one to one (1:1) relationship is the relationship of one entity to only one other entity, and vice versa. It should be rare in any relational database design. In fact, it could indicate that two entities actually belong in the same table.An example from the COMPANY database is one employee is associated with one spouse, and one spouse is associated with one employee.
Let us assume that a male can marry to one female and a female can marry to one male. So the relationship will be one to one.

Using Sets, it can be represented as: 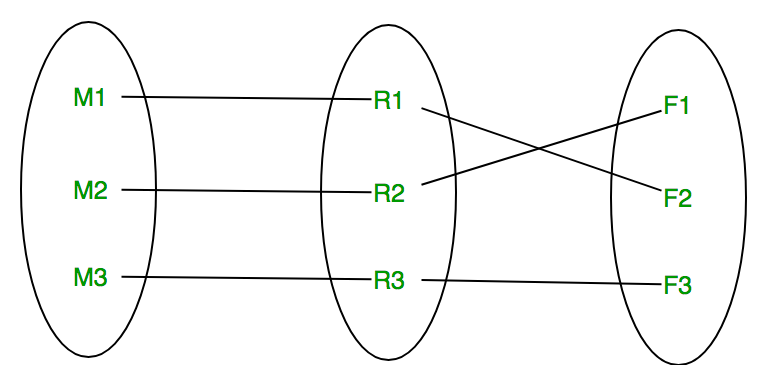 One to many (1:M) relationship

Using Sets, it can be represented as:

Using sets, it can be represented as: 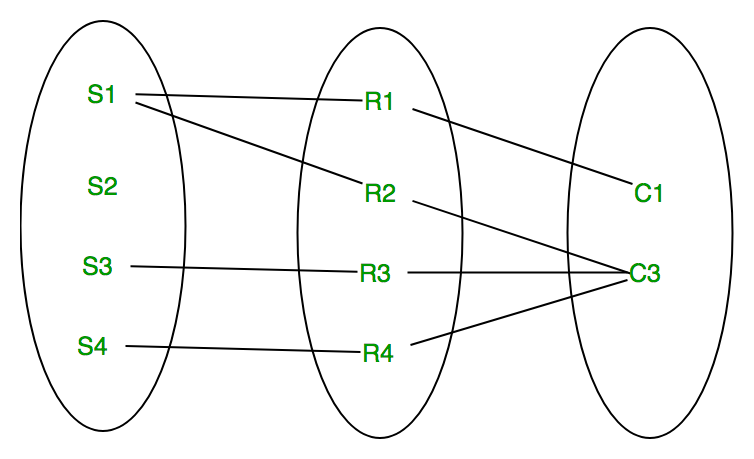 Figure shows another another aspect of the M:N relationship where an employee has different start dates for different projects. Therefore, we need a JOIN table that contains the EID, Code and StartDate.

ER- Diagram is a visual representation of data that describe how data is related to each other.