A transaction is a single logical unit of work which accesses and possibly modifies the contents of a database. Transactions access data using read and write operations.
In order to maintain consistency in a database, before and after transaction, certain properties are followed. These are called ACID properties.
Atomicity  (all or nothing)
By this, we mean that either the entire transaction takes place at once or doesn’t happen at all. There is no midway i.e. transactions do not occur partially. Each transaction is considered as one unit and either runs to completion or is not executed at all. It involves following two operations.
—Abort: If a transaction aborts, changes made to database are not visible.
—Commit: If a transaction commits, changes made are visible.
Atomicity is also known as the ‘All or nothing rule’.
Consider the following transaction T consisting of T1 and T2: Transfer of 100 from account X to account Y.

If the transaction fails after completion of T1 but before completion of T2.( say, after write(X) but before write(Y)), then amount has been deducted from X but not added to Y. This results in an inconsistent database state. Therefore, the transaction must be executed in entirety in order to ensure correctness of database state.
Consistency (No violation of integrity constraints)
This means that integrity constraints must be maintained so that the database is consistent before and after the transaction. It refers to correctness of a database. Referring to the example above,
The total amount before and after the transaction must be maintained.
Total before T occurs = 500 + 200 = 700.
Total after T occurs = 400 + 300 = 700.
Therefore, database is consistent. Inconsistency occurs in case T1 completes but T2 fails. As a result T is incomplete.
Isolation (concurrent changes invisibles)
This property ensures that multiple transactions can occur concurrently without leading to inconsistency of database state. Transactions occur independently without interference. Changes occurring in a particular transaction will not be visible to any other transaction until that particular change in that transaction is written to memory or has been committed. This property ensures that the execution of transactions concurrently will result in a state that is equivalent to a state achieved these were executed serially in some order.
Let X= 500, Y = 500.
Consider two transactions T and T”.

Suppose T has been executed till Read (Y) and then T’’ starts. As a result , interleaving of operations takes place due to which T’’ reads correct value of Xbut incorrect value of Y and sum computed by
T’’: (X+Y = 50, 000+500=50, 500)
is thus not consistent with the sum at end of transaction:
T: (X+Y = 50, 000 + 450 = 50, 450).
This results in database inconsistency, due to a loss of 50 units. Hence, transactions must take place in isolation and changes should be visible only after a they have been made to the main memory.
Durability:(committed update persist)
This property ensures that once the transaction has completed execution, the updates and modifications to the database are stored in and written to disk and they persist even if system failure occurs. These updates now become permanent and are stored in a non-volatile memory. The effects of the transaction, thus, are never lost.
The ACID properties, in totality, provide a mechanism to ensure correctness and consistency of a database in a way such that each transaction is a group of operations that acts a single unit, produces consistent results, acts in isolation from other operations and updates that it makes are durably stored. 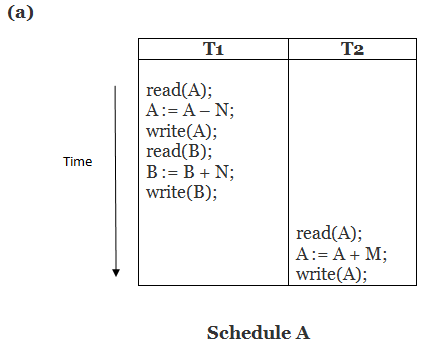 Concurrent schedule: The transaction are executed in a preemptive , time shared method. 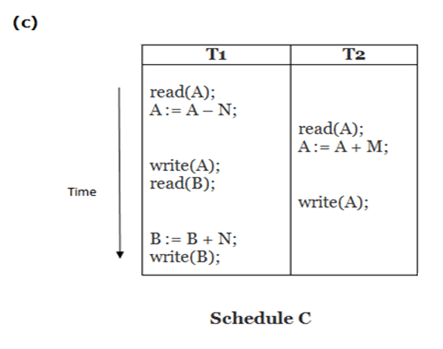 Types of lock:-
Depending upon the rules ,we have found we can classify the locks into two types: